Whether you attended American River College, Cosumnes River College, Folsom Lake College, or Sacramento City College for one class, graduated with multiple degrees, or transferred to a university, you are a Los Rios alum and we want to recognize and remember you. Today's students are inspired by you and your fellow alumni. They appreciate your stories and memories, and value those alumni who give back to one of our colleges through volunteerism or through the Alumni Fund to help make their education possible. You can maintain your relationship with Los Rios after you leave by joining an Alumni Association at no cost.

Alumni Association benefits will resume when we are back on campus. 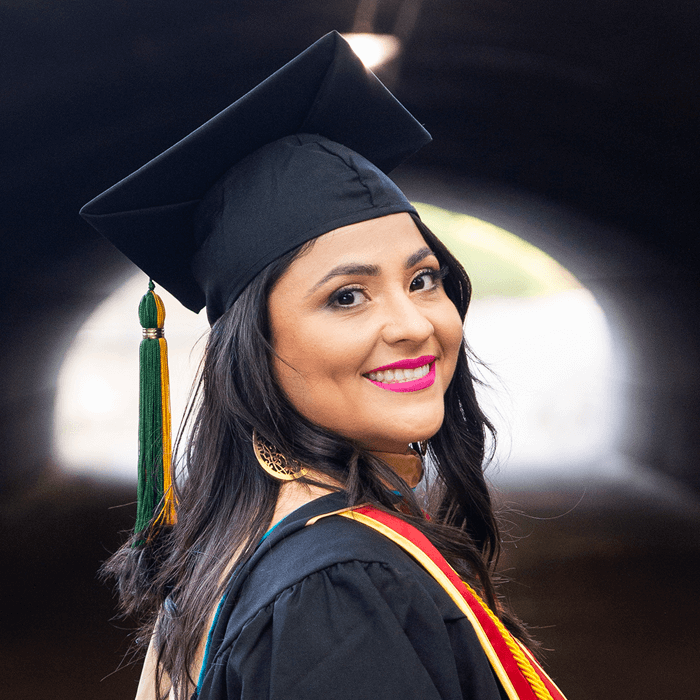 "ARC served as a buffer to the shock of being a newcomer on so many levels." Clarissa Laguardia Alumni / 2012 / Liberal Arts / American River College Read More

"ARC served as a buffer to the shock of being a newcomer on so many levels." Clarissa Laguardia Alumni / 2012 / Liberal Arts / American River College

I emigrated from El Salvador and arrived in California fresh out of high school in 2003. Back in those days, the internet was not what it is today. I had not been exposed to other languages or cultures. My early years in El Salvador encompassed a life of limitations and an ongoing brutal civil war, which meant poverty, insecurity, scarcity, and political unrest. Those were uncertain times, and when you are so young it really stays with you. My parents worked extremely hard but there were few opportunities around.

Once in the U.S., I began working at a grocery store in North Sacramento. I remember people’s looks because I did not understand enough English or could not express myself. I clearly remember pranks by co-workers, their put downs such as “go back to your country,” and other discriminatory behavior. All of this made me feel unwelcome and small. For example, when asked to go grab “clam chowder or ravioli,'' I had no idea what that meant. I did not know idiomatic expressions or pop culture. All I knew was the volcanoes, tropical jungle, and the Latin American history, culture, and cuisine of my homeland. It is a terrifying situation for a young woman.

A few months in, I was able to secure a better job at a large school district. This allowed me to have the headspace to think a bit ahead. I learned about American River College. I went in and it was quite intimidating. I had never been to a learning institution that big ever. All my schools in El Salvador were so tiny in comparison to American schools. I had to ask strangers as to what to do to enroll or how things worked around here. I had no concept of a counselor. I had no idea what that meant. I would meet with them and leave still confused, simply because I had no context to what they were talking about. Finally, I took placement tests and proceeded to take ESL classes. I could have never guessed this would be a decisive moment in my life. Had I not taken the time to learn English well, I would not be where I am today. ARC served as a buffer to the shock of being a newcomer on so many levels. I was among peers who shared a similar experience. I was lucky to learn from dedicated professors. The student support service centers helped me navigate an otherwise intimidating situation.

Unless you are an immigrant, you have no concept of what it is like to walk around not knowing anything. I mean that literally. I did not know cultural norms, which meant I did not know how to act or dress American. I stood out. I had to couch surf as I did not have a place to live just months after arriving. I did not know there were stores that had discounted groceries or places to buy used furniture. My first apartment was empty for a while. For years, I scrambled to make ends meet. Many times, filling my belly with water because I had no food. I had no extra money. I was not financially literate. I lacked most survival skills. The great side of this story is that somehow I learned to navigate everything. This experience made me tough, resilient, and fearless.

After earning an Associate’s Degree at American River College, I was able to transfer to Sacramento State University. Once again, I was truly lost. I still did not understand the higher education system and the difference between community college and a 4-year college. At that point, I had decided to leave my stable job at the school district to pursue my undergraduate degree, which motivated me to start my own business. I worked as a translator and interpreter for about eight years and so it was the logical type of business to go into. I am proud my business has been active and gradually growing over the last 15 years.

In 2015, I was able to successfully graduate with a B.A. in Communication Studies with a concentration in international and intercultural communication. Around the same time, I started volunteering for various causes in the community. I was awarded Inspiration Estrella by the Hispanic Chamber of Commerce in 2018. That same year, I went to Italy to participate in a highly specialized training on intercultural communication research. In 2019, I served as a Governor appointee as Language Access Manager for the California Complete Count - Census 2020 Office. I developed the Census standards and Census methodology used by the state of California in their outreach campaign. The work I did was so meaningful to me. I hope to build upon it in the future.

My community activism led me to realize I wanted to do something about injustice and inequality. I enrolled at Sacramento State University to pursue a masters in public policy and administration. In May 2021, I joined the 4 percent of Latinas who have attained a master's degree or higher in the United States. I was nominated as CSUS’ Newman Civic Fellow in 2020. I have a deep gratitude for Sac State because that is where I found mentors among peers and faculty, but also made lasting friendships. Over the span of almost 17 years in the language access realm, I have learned a lot and can provide new insights on this topic. As part of my graduate work, I developed www.rethinklanguageaccess.com. A space to discuss and think of innovative ways to address the language gap affecting over 25 million Americans.

Of course, this journey has not been easy. I have put myself through college while supporting my mother back home. There were months I did not know how I would pay the rent or bills. At times, I had to work multiple jobs. I had to still show up in hostile environments despite inner battles with deep trauma. I doubted my ability to succeed. I was ashamed of my accent. I dealt with racist treatment almost everywhere I went. I had to learn content and language at the same time, which meant reading the same sentence too many times to count. It involved being the recipient of microaggressions.

In the end, I can say that this immigrant experience gave me an edge few people have. In fact, I developed a sense of setting goals and mapping a plan to achieve them. I became keenly strategic and intentional. Sometimes I cannot believe how much my life has changed. I grew up having so little. I own a small business, and I am getting ready to open a second venture. I intend to do public policy and/or civic engagement consulting. I continue to give back and serve on community organization boards. I am so pleased I am at a place where I can walk away from hostile environments because of my knowledge, education, and experience. I can choose where I work and what I do. None of it would be possible if I had not been able to learn English and earn my transfer prerequisites at ARC.

To all my fellow immigrants and queer people of color, never give up. Also, once you do achieve your dreams, take the time to help others along the way.